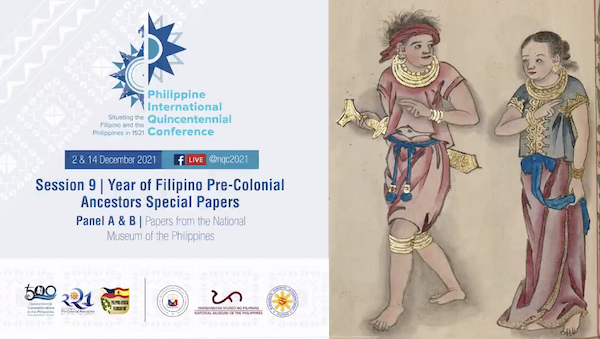 Watch Panel A and B: Coming Full Circle in The Philippines: Climate Change, Environmental Shifts and Evidence of Human Adaptation
https://fb.watch/9Qk6Q5gxs5/

Panel C begins with a paper from the late British Historian Robert "Bob" Couttie with his work on documenting the historical errors from the works of Carlos Quirino, followed by Dr. George Emmanuel Borrinaga of the University of San Carlos with his paper on Homonhon and the Magellan Landing, Prof. Michael Angelo Doblado of the Palawan State University on his documentation of the landing sites of the Magellan-Elcano Expedition in Palawan. This will be supplemented by the discussion of the process of marking the Philippine route of the First Circumnavigation of the World by Archt. Genissa Villegas, Ms. Juvelyn Nierves, and Mr. Josef Alec Geradila of the National Historical Commission of the Philippines (NHCP) and the documentation of the various pre-colonial elements from the costume of 2018 Miss Universe Catriona Gray by Mr. Gerwill Cruz of the NHCP. This panel will be moderated by Mr. John Paul Abellera of Project Saysay, Inc.