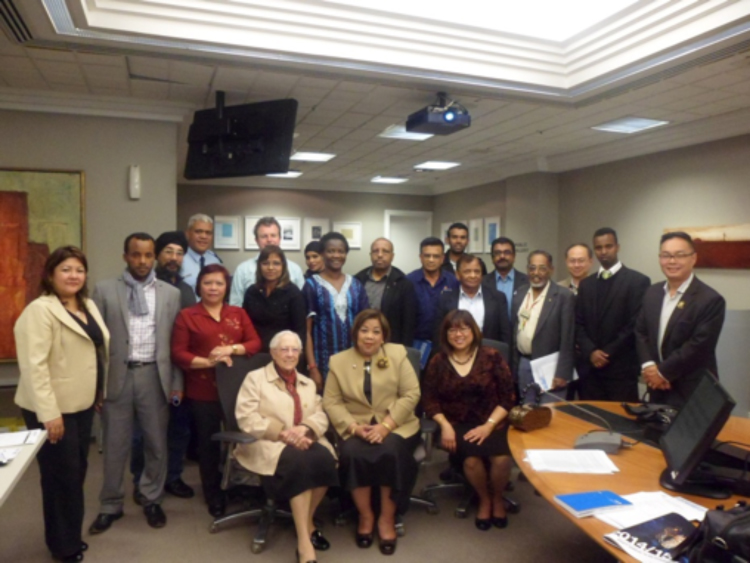 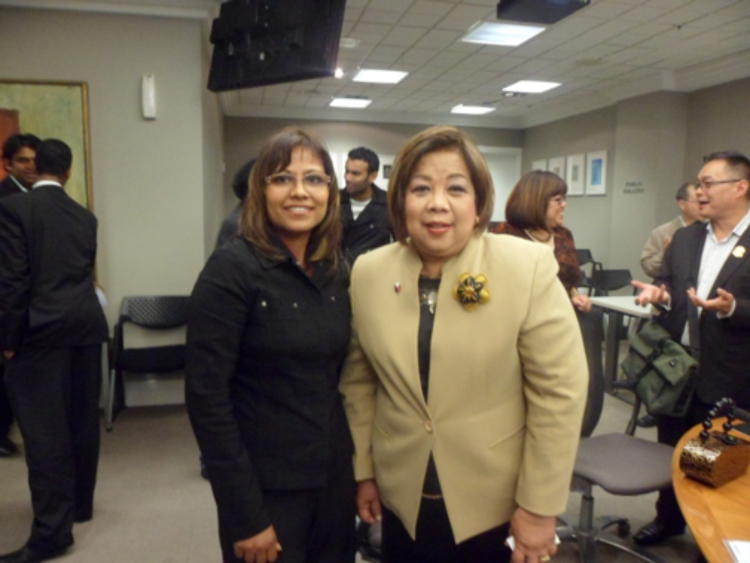 As part of its objectives to strengthen people-to-people ties and broaden community development, the Multicultural Council of Wellington (MCCW) unanimously chose Philippine Ambassador Virginia H. Benavidez as its first Head of Diplomatic Mission to be closely and directly engaged with and invited her to speak at the first MCCW Meeting for 2014 held at the Wellington City Council on 11 February 2014. The MCCW, an affiliate member of the New Zealand Federation of Multicultural Councils, is a non-profit and membership-based organization established 23 years ago and is run by volunteers from more than 20 community organizations. Its mission is to promote and develop cultural, social, sports and other activities to enhance friendship, unity and cooperation among various ethnic groups and the wider Wellington community and contribute towards collective efforts to build an inclusive and multicultural society. The Philippines is represented by the HIYAS Wellington headed by Ms. Lonie Martin, an active leader of the Filipino community. She is also the Treasurer of MCCW. 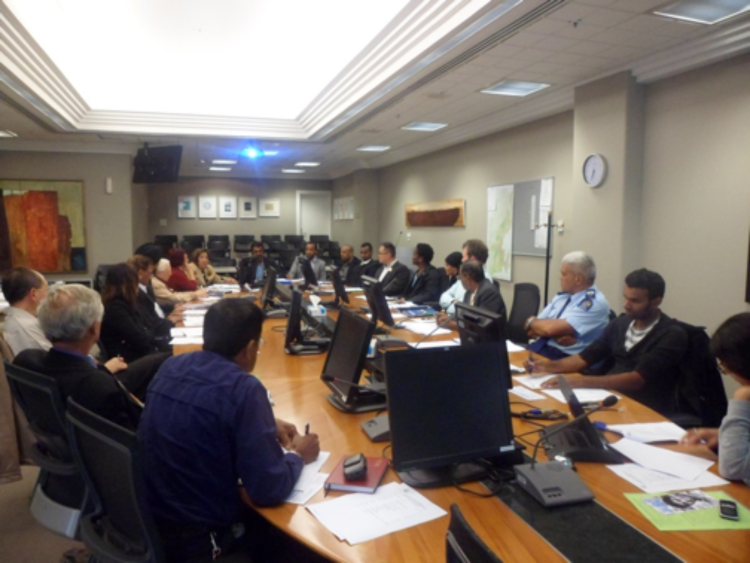 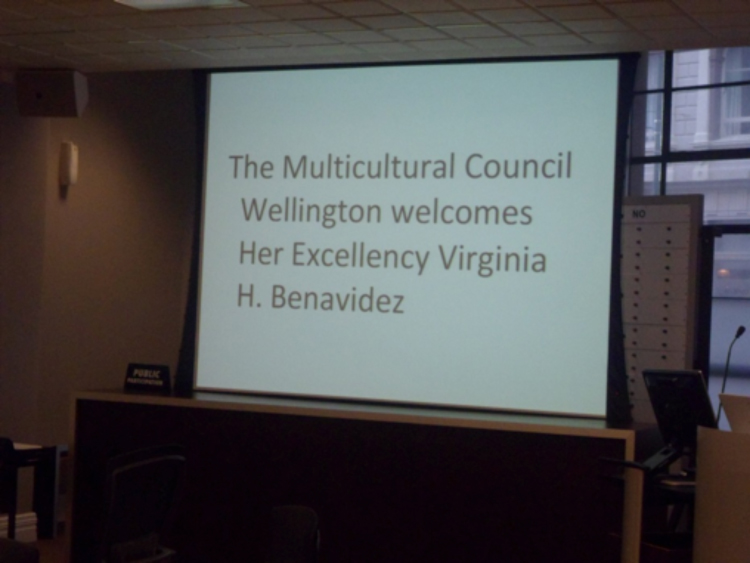 In her keynote speech, Ambassador Benavidez commended the MCCW for its mission and vision to continue journeying together with other stakeholders to promote and strengthen the multicultural foundation and ethnically diverse composition of New Zealand and doing its part to work towards an inclusive and thriving society. “Living together peacefully in Aotearoa where the roles, cultures and contributions of different migrants and ethnic groups are acknowledged as they make the most of opportunities, work and way of life here and as they connect themselves with the local communities constitute the true essence of New Zealand’s story of an independent, small and diverse country with a shared future among its culturally rich, unique and diverse people,” Ambassador Benavidez stated. She shared with MCCW the multicultural tapestry of the Philippines and the Southeast Asian region arising from waves of migration across centuries, coming of different religions, arrival of populations from various countries, legacy of colonial influences and influx of modern day migration and movement of people across boundaries. She also highlighted ASEAN, spanning a region of 620 million people of varying ethnicities, religions, form of governments, levels of economic development and socio-cultural dimensions which is now moving towards its collective goal of one vision, one identity and one community in 2015 within the political-security, economic and socio-cultural pillars. Governments, private sector, academe, non-government organizations and various stakeholders are currently stepping up community-building efforts on the basis of consultation, consensus and cooperation reflecting the spirit of caring and sharing societies and the preservation of the region’s vast cultural heritage and living traditions. These have been the hallmarks of ASEAN’s multicultural prominence in the regional and international arenas.

“I am a personal witness to how the multicultural society of New Zealand and its prevailing community spirit of sharing and caring continue to make a positive, practical and distinctive difference in people’s lives, especially in times of great need. In the aftermath of super typhoon Haiyan which unleashed its unimaginable fury and unprecedented wrath on Central Philippines more than three months ago greatly affecting nearly 15 million Filipinos, New Zealand and many countries and countless people from all walks of life demonstrated the triumph of humanity’s goodness and compassion in the midst of tragedy and trials, rubble and ruins. Words will never be enough to reiterate our heartfelt gratitude to the Government and People of New Zealand for the generous and gratifying groundswell of sympathy, support and solidarity, for staying by the Philippines’ side all the way and for helping lift our spirits and wipe away our tears. Engraved in our hearts are New Zealand’s immediate humanitarian assistance and support, messages of sympathy, hope and encouragement to the Filipino people of Kia Kaha (Be strong), Arohanui, (With great love) and Taiki e (We are one) and the kindness and empathy from New Zealand’s multi-ethnic communities who generously gave and graciously shared to help the multitude of survivors who fought so hard and so well to stay alive. Now that they are back on their feet being assisted in the on-going multi-stakeholder and multi-dimensional restoration and rebuilding process, the Filipino people continue to be deeply moved by the “Bayanihan” (volunteerism and coming together to help) spirit of New Zealanders and the Filipino and other ethnic communities in Aotearoa to help rebuild lives and restore livelihood for the benefit of millions of Filipinos in the disaster stricken areas. In words and in deeds, this is a shining example of a multicultural nation in swift action and a multi-ethnic and inclusive society at its very best! Our unending thanks, New Zealand,” Ambassador Benavidez stated.

She spoke on how the Multicultural Council of Wellington is well positioned to be at the forefront of supporting the capital city’s programmes and projects to develop inclusiveness, openness and tolerance among its diverse communities, celebrate, learn, respect and encourage each other’s uniqueness, religious beliefs, traditions, cultures, festivals and languages. These are where the Philippines, New Zealand and other countries’ communities are all interconnected. Underlying the MCCW’s mandate and mission would be its caring and sharing community spirit which must continue to be translated in practical measures. Furthermore, in unity of mind and purpose with other Multicultural Councils in Aotearoa and the New Zealand Federation of Multicultural Councils, the MCCW equally has a vital role to play in moving forward the Treaty-Based multicultural future of New Zealand.

Ambassador Benavidez thanked the officers and members of MCCW for the wonderful opportunity to engage with them on an area and advocacy close to the Filipinos’ hearts and of interest to everyone and said that she is looking forward to meeting all of them again when she hosts a multicultural fellowship gathering at “Ang Bahay” (Philippine Ambassador’s residence) in the near future.